1:33 PM Sitting in the gate lounge at the Kahului airport. My flight back to the Bay Area boards at 2:05. Woke about 6:30, cleaned condo, did two loads of laundry, bedding towels etc, and returned the rental car, getting to the airport too late for  any breakfast but Starbucks, where the line was too long. So had a Burger King chicken sandwich for about $13. Oh well, I was hungry. I suppose they will serve lunch on board not long after lift-off, but that will still probably be close to 3 pm. First class meals are not what they used to be. Thank God though for last-minute first class $100 upgrades. The flight back should at least be fairly pleasant , with no armrest wrestling. Hmm, maybe I can finish that Money Monster movie.

Looking forward to getting home. It was a good vacation, though not what I was expecting. I think that may be the end of my travels to the tropics. Future vacation destinations will definitely be to cooler climates. It was also good to have 10 days with no commitments except to eat and sleep.


Posted by Len Hodgeman at 4:45 PM No comments:

6:09 PM. Well, it's hard to give up a dream, or a fantasy, and not that easy to tell the two apart sometimes. Whichever one it might be, I have had a chance to try it out for 10 days, and I am so very grateful for the opportunity. But, it's not the right place. The search for the right place goes on. When

I was 19, I was stationed in Puerto Rico for about a year, where the temperature occasionally hit 110 degrees. Can't say I enjoyed that, but I think the 80's and 90's didn't bother me. But the body is not what it was, and I am certain that the right place for me is going to be a lot cooler than Hawaii. I don't believe that I would find anywhere right on the ocean where the temperature and humidity would be right for me now.

So, today I spent some time online, continuing the search. Looking now on the coast, north of San Francisco. More details later.

For now, it will be good to get back to San Mateo, and my small, though very cool, studio.
Posted by Len Hodgeman at 9:16 PM No comments:

7:26 pm - Just got back from the local Beach Bums restaurant, where I had a Caesar salad with crab cakes. The crab cakes were awesome, the salad a bit wilted, but otherwise tasty. Getting tired of the heat and humidity, ready to go back to San Mateo, where it is about 10 degrees cooler at the moment.

Thought I would do more exploring, more meeting people, more adventure, but I've been mostly lethargic. However, it has been good to get away from work for a while. i do actually enjoy the work when I don't stress out about deadlines. We'll see if I can maintain my cool a little better for a while. And take more vacations.

I had also hoped to feel more inspired to write, but other than this blog, I haven't done any other writing. Hmm. I wonder what might happen after a few months of retirement? Who knows? Maybe writing, maybe something entirely new and different.

10:15 am - According to my Weather Nerd app, it is 82 degrees, with 78% humidity and feels like 87, with a 47% chance of rain. When I woke this morning, about 4:30, I think it was about 75 degrees. With the tradewinds blowing through the condo, and the sun not yet up, I felt very optimistic about the possibility of living here.

However, by 9, the temperature was up to 79 and it began to be a bit stuffy/sticky. I had been meaning to do laundry for a few days, but had put it off, not wanting to do anything to increase the heat in the condo. So, I turned on the AC and am just finishing drying a load of clothes - in a dryer that does not vent outside. So, I don't know the temp inside, but am sitting as close as possible to the AC (without rearranging furniture).

The thing is, I notice that at a certain temperature/humidity point, I stop enjoying life and just survive. I've even noticed it back in the bay area, especially when visiting Roberta's apt which gets very hot on some days. I just can't wait to get out, and haven't visited much this summer due to that fact.

I certainly don't want to retire, and move all the way to Hawaii, to just survive. I've spent the day inside. I've stepped out a few times and quickly back in. I think maybe today is the turning point, and it no longer seems feasible to move here. Went back on the web, and looked for places in Santa Barbara 9 (too expensive), and south to Port Hueneme (near Ventura). It's only 5 1/2 hours from San Mateo, perhaps I'll drive down there on a four-day weekend soon.

It's a hard thing to give up a dream, that of living with the ocean right outside my door. But I've spent 8 days here, and it's beautiful, but I can't stand the heat or humidity like I could when I was younger.

I may not retire next week, but the search is on.
Posted by Len Hodgeman at 10:04 PM No comments:

They call it upcountry, the areas up in the mountains, away from the beaches. Kula, today's destination is about 3,000 ft above sea level. 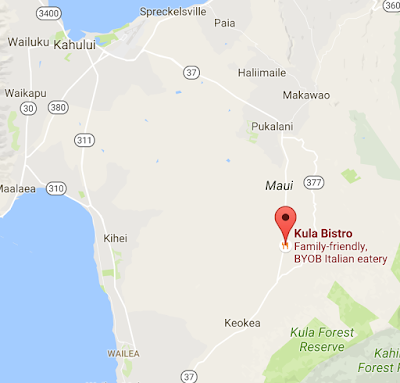 To get there, I had to go north, nearly to the airport at Kahalui, then east and finally south into the interior, climbing all the while. Distance about 23 miles. It was a bit cooler as I started to climb and the vegetation turned bright green and some areas of darker green trees. The it started to rain. I had the top down, so I had to stop and put it up. The windshield wipers had seen their better days, and smeared the water over the surface of the glass rather than wiping it away. visibility was not good, unfamiliar roads, a touch of agoraphobia, and the trip suddenly turned pretty stressful.

The roads narrowed, twisted and turned and climbed. I had to keep my eyes on the road, peering through the smeared windshield, shoulders hunched and got a headache.

When I finally got there, there wasn't much to see. Mostly residential, a gas station, hardware/feed store, general store and the Kula Bistro, which didn't open until 11, about an hour and a half away. So I asked, and went 5 miles further to Grandma's Coffeeshop. It was warm and muggy, though the rain has let up. Food was adequate, but not particularly memorable.

Had to walk a few hundred yards to the nearby park to use the public restroom, as the restaurant didn't provide one.

Headed back home to Maalaea. 82 degrees with 81% humidity.
Posted by Len Hodgeman at 3:06 PM No comments:

Ah, sweet mystery of life! I had been pondering whether or not to connect up with a realtor while I'm here. The primary reasons for my visit were\are -

I had a realtor call me, due to having to provide a phone number in order to get to see details on a particular website. I knew someone would call. And they did, within about 2 minutes. But I wasn't ready to talk to someone yet.

Then, I was talking to the couple who just bought a small convenience store in one of the condos, and they gave me the name of an agent. Pondered whether/when to call her.

Then yesterday, I was exploring the rest of the street and I noticed an open house sign. I rarely resist an open house that might possibly be something I'm interested in. So, I checked it out. It was a leasehold, 2 bedroom, first floor, concrete block walls, complicated numbers. But the agent, Dave, suggested there was a 2 story 1 bedroom 1 1.2 bath nearby that I might want to look at.

So, this morning, I met him and the listing agent at 9 am. The condo unit, the Maalaea Mermaid, is the closest one to the harbor, and does not have a direct panoramic view of the ocean like the one that I am staying in. Apparently the one I'm at, the Maalaea Banyans, doesn't have units for sale very often, and none at this time. The realtor said that if/when they did, one like the unit I'm in would probably run over $400K.

Not ready to jump yet, but this is the first unit I've seen so far which I could see myself in, and affording. A bit of a budget stretch, but we'll see how I feel about it tomorrow.

Here's the view from the Lanai. 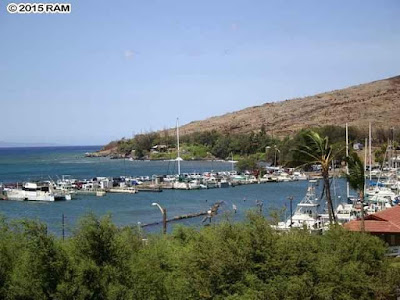 Oh, did I mention 895 square feet? And with a sleeper sofa and the half-bath downstairs, I could actually have guests come and stay with me!

Posted by Len Hodgeman at 3:40 PM No comments:

It's been a long day. I don't remember what time I got up, but it was before dawn. I decided to drive to Lahaina, which means driving down the coast, around the southwest end of Maui, and then north. It was about 18 miles, and took about a half hour, as the drive included some pretty curving roads and a tunnel, as well as a bit of a climb going around the tip. 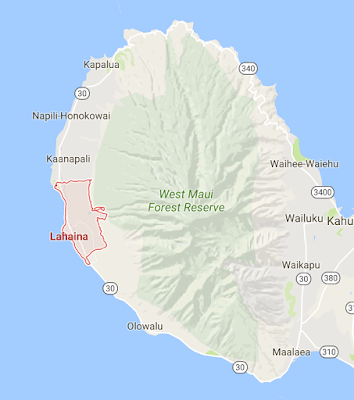 It was one of those things that I just had to do as soon as I awoke, without overthinking it. I was wary that the drive might kick off my agoraphobia. So the drive wasn't bad because I was in town before it was very light. Stopped at Starbucks for a latte and breakfast sandwich and then walked along Front street, which is a bit artsy/touristy. There were very few people on the street. Apparently the cruise ships come on Sunday mornings.

I did appreciate having a convertible, drove both ways with the top down. The Mustang can feel a bit cramped and claustrophobic visually with the top up.

Got a haircut at Supercuts, and stopped in at a Minit Clinic, one of those urgent care clinics that have been springing up all over the place lately. 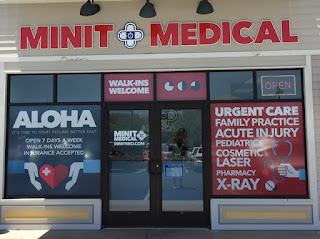 Talked to a young guy who might have been the doctor or a PA about medical care, 911 calls, ambulance service, etc, which have been an area of concern for me in considering possibly retiring in the area. There's also a Kaiser clinic, but for an emergency room, I'd have to drive to Wailuku, which is actually closer, 7.4 miles, about a 15 minute drive. Interestingly, so far the highest speed limit I've seen is 45, with most populated areas at 35 mph.

At home, I rarely have the top down, because most of my driving time is on the freeway in traffic, which actually is not that pleasant. But here, I could see having the top down all the time.

It was a few degrees warmer today than yesterday. So mid-afternoon got a little sticky/uncomfortable, but it's starting to cool off a bit now, and I'll think I'll take a little walk.

Posted by Len Hodgeman at 9:16 PM No comments: